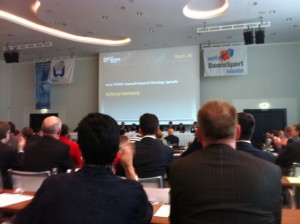 The World DanceSport Federation (WDSF) AGM took place on 16th & 17th June 2012 in Berlin. It was attended by representatives from over 50 countries.

Olga Komarova, DSGB President, attended as an observer.  Below are some of her notes from the AGM.

WDSF AGM took place on the following day, covering such aspects as new ID Cards for all International competitors to become compulsory from January 2013.

The new Technique books are expected to be published next year, describing body action, swing & sway, as well as additional figures and development of existing figures in both Standard & Latin.

After a three hours’ deliberation, DSFR was expelled and a new federation, Russian DanceSport Union, was accepted as WDSF Member Body.  This was necessary due to inability of the DSFR to organise National or International events in the future, according to Russian law.

In a Worldwide organisation communication has never been an easy task.  Now, with an excellent website, things have improved considerably.  This is due to the hard work of Communication Department, Chair Heidi Goetz (Austria).

Several Motions were withdrawn by Presidium, as well Member Bodies, needing more clarification. Sanctions for participation in non-WDSF events had to be withdrawn until the AGM next year.  In the meantime, all athletes and adjudicators already suspended may apply for re-instatement.

Situation in England was mentioned in the Report of WDSF General Secretary, Mr Shawn Tay. Specifically, Crystal Palace DanceSport Cup was stated as having strong support of the WDSF Sports Commission.

In general, the meeting was very well organised, many thanks to the DTV (German DanceSport Federation).”