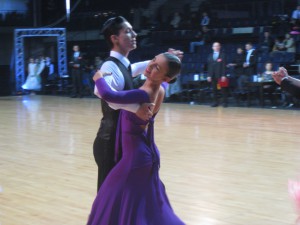 Kėdainiai Open 2015 was my first international competition and it was an amazing experience.

Weeks before the big day, I was very worried. I did not have a broad idea of what to bring, how to act or even what to expect. The feeling of butterflies made me nervous. As a perfectionist, I couldn’t stand thinking that I may forget to pack the essentials for my trip. Surprisingly, the dancing did not faze me – if anything, it spurred me on to practice harder under my coaches’ guidance. Thankfully, my partner and I were travelling with a more experienced couple and that eased the nerve. With a travel checklist in hand, and a better idea on what to expect, I was feeling confident and eager to go!

We arrived late on Friday evening to Kaunas airport, and hopped on our transfer bus to travel to one of the oldest cities in Lithuania. An hour later, we arrived in Kėdainiai. A quick dinner in the hotel restaurant and off we go to bed, ready for an early start the following day.

The weekend competition was intense. The day started at 6am to give me plenty of time for hair and make up, breakfast at 7.30am and a short taxi ride to the sports hall. Upon arrival, the boys went to register for our entries and picked up our numbers, while the girls finished getting ready into our costumes. Because we arrived early, the floor was empty and gave us a chance to warm up. Soon afterwards, the judges arrived, registration closed, and everyone waited eagerly for the timetable and heats to appear.

The competition itself had an inspirational atmosphere, which had my adrenalin going to perform 110% better than in my practices (sorry coach!) Being on the floor with couples from several different countries made me very proud. I was also grateful for the opportunity to be representing England with my partner at such a strong competition.

Two days, five events later, Andrei and I were both exhausted. The early starts and late nights finally caught up with us but we absolutely refused to give in – certainly not when we were beaming with joy at our victory of reaching fourth place in our final competition!

Watching different levels of dancers, including WDSF International Open Standard and Open Latin, performed throughout the day gave us lots of inspirations. It was also refreshing to see how different couples performed some of the moves we had been practising back home.

Sunday evening, we were finally able to relax and enjoy some Lithuanian traditional dishes to celebrate our victories. The feeling of uncertainties was gone and I actually felt very much at home in Lithuania. As a native Belarusian who speaks Russian, I was able to translate for the group, from getting around to ordering food. Travelling with another couple was great fun – we shared jokes and encouraged each other in between rounds.

In conclusion I think that for the first competition, it was a success in terms of everything! Even though England is not “thought” to be one if the strongest countries in DanceSport right now, I think that with more sweat, pain and cheers, Great Britain will soon regain its reputation in the dancing world!

Vanda Sigel and Andrei Nistor represented England in the class-level competition at Kėdainiai Open 2015. The two-day event was held in Lithuania on 14-15 February. 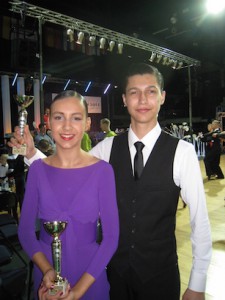