Last Saturday, 15th October, saw a successful return of the DSGB international event. Adult and children competitors took part in a range of events in both style of Standard (Ballroom) and Latin American dancing.

Performing in front of an enthusiastic live audience, the couples showcased all ten dances, including Cha Cha Cha, Jive, Waltz and Tango, according to their own class levels and abilities. Five adjudicators from Estonia, Germany, Latvia and England ranked these dancers based on musicality, technicality and overall performance.

A special highlight from the day was the team match, which involved couples of all levels working together as one team for the top prize. Each of the four teams were dressed in special Halloween costumes: Black Cats, Orange Pumpkins, Purple Spiders and White Ghosts. Points from each couple were added up for the final score.

Photos from the event can be seen here and here. Results will be published shortly. 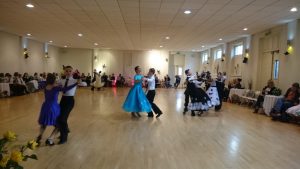 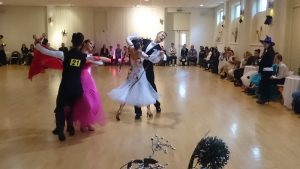